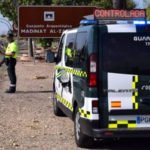 The Guardia Civil has reported today, Tuesday 4, that they are searching for the driver of a BMW 740I that was captured by the Cinemometer (radar) of the DGT (General Traffic Directorate) travelling along the A-45 near Córdoba, at Km 53.2, at a speed of 237kph (147mph), on January 25.

Officers of the Research and Analysis Group (GIAT), of its Traffic Subsector in Córdoba had reportedly started an investigation on January 25, but to date, have been unable to trace the driver, who is wanted for a possible crime against road safety for breaking the speed limit, stating article 379 of the Penal Code, which stipulates that “anyone who drives a motor vehicle on an interurban road at a speed greater than 80 kilometers per hour than that permitted by law” is committing a crime.

According to the statement from the Guardia Civil, “at the point where the vehicle was captured, where the speed limit established is 120kph for cars and motorcycles, the fact of driving at a speed greater than 200 could be constitutive of crime. For this reason, driving a vehicle at 237 kph, once the corresponding error margins have been applied, would be within the aforementioned assumption”.

Research and Analysis Group (GIAT) has delivered the appropriate proceedings to the Aguilar de la Frontera Investigating Court, requesting authorisation for new procedures to be put in place to prevent this type of situation occurring in the future, which will enable them to identify the driver of the vehicle, and obtain total clarification of the facts, as reported by sevilla.abc.es.