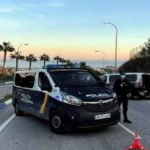 French Fugitive With A Warrant Against Him Captured In Marbella After Jumping A Roadblock.

NATIONAL POLICE in Marbella arrested a 30-year-old fugitive wanted in France – who had a European Detention and Surrender Order (OEDE) issued against him –  after he sped through a police roadblock, resulting in a car chase that ended in the Costa del Sol town on Estepona, in the province of Malaga.

The incident occurred in the middle of April when units of the Citizen Attention Group and the Prevention and Reaction Unit had arranged a control of vehicles and narcotic substances in Marbella, and the officers identified a high-powered vehicle approaching at such a speed that it was clear it was not going to stop.

By conducting an evasive manoeuvre, the driver cleared the police control, while endangering the officers and other road users in the process, thus causing police patrol cars to give chase, and the vehicle was eventually intercepted near Estepona, with the driver arrested for failure to stop, and dangerous driving.

According to a statement, a search of the driver uncovered fake identification documents, he also had no driving licence, and a further check on his identification showed that he had the European Detention and Surrender Order (OEDE) issued by French authorities last November for his activity in drug-related activities in that country, which carried a three-year prison sentence, and he was known to go by five aliases.

The French fugitive has been detained and will appear before a judge in Court No3 in Estepona, as reported by 101tv.es.