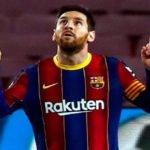 Barcelona made the short trip to the Mestalla in Valencia on Sunday evening knowing that only a win could keep them in the four-horse fight at the top of LaLiga Santander, after both Madrid teams had won on Saturday.

Once again, it was their Argentinian wizard, Lionel Messi, who conjured up the goals to seal a hard-fought victory that leaves Barca two points behind Atletico, with the two teams squaring up next weekend in a crunch fixture.

Barcelona could have been two up within the first 15 minutes had Pedri and then Araujo taken their opportunities better, with former Blaugrana keeper Jasper Cillessen keeping the latter at bay, and Valencia’s Uros Racic missing a good chance, in what turned out to be a pretty uneventful first 45 minutes.

A corner kick on 50 minutes opened the match up, as a Ter Stegen slip allowed Gabriel Paulista to head home for Valencia to put the home side ahead.

A handball by Antonio Lato after 57 minutes was Messi’s chance to level, but when Cillessen saved the Argentinian’s poor penalty, luckily Busquets was on hand to allow Messi to eventually put the ball in the net for 1-1.

With Barca pushing forward it was Jordi Alba who fed Frenkie de Jong, whose headed attempt was snuffed out but rebounded to Griezmann who made no mistake on 63 minutes to put Barcelona 2-1 up.

It was then time for the Messi magic show, as he curled a left-footed free-kick over the Los Che wall and into the net to make it 3-1, after 69 minutes, though Valencia were not going to roll over, and a stunning long-distance strike by Soler after 83 minutes pulled them back to 3-2, but, in the end, to see Barcelona edge Valencia and grab those vital three points, as reported by marca.com.