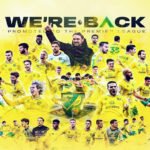 Norwich City are back in the Premier League, after spending just one season in the Championship, promoted for the fifth time, as results on Saturday went in their favour, meaning they could not be overtaken at the top of the table in the automatic promotion places

Following Swansea City’s 2-2 draw at home to Wycombe Wanderers, and Brentford’s 0-0 draw with Millwall, even a 3-1 home defeat at Carrow Road by Bournemouth still means Daniel Farke’s Norwich side can now only be stopped from being crowned Championship champions for a third time by Watford, who, being eight points behind, seem unlikely to catch them.

Unlike a lot of relegated teams, Norwich have bounced back at the first attempt, which must be credited to their German coach Daniel Farke who really does seem to have instilled a winning mentality in his players, many of whom were a part of the squad that dropped down from the Premier League last season.

A defence that has only conceded 28 goals is remarkable, and Tim Krul has kept 18 clean sheets, while at the other end, Teemu Pukki has bagged 25 goals in 37 league appearances, with The Canaries netting 65 times this season, and to round it off, on 90 points and with five matches still to play, there is the possibility of the team finishing with 100 points, as reported by bbc.com.