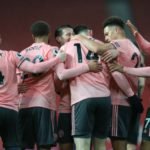 Sheffield United travelled to Old Trafford on Wednesday evening to face the newly-resurgent Manchester United, with The Blades sitting bottom of the Premiership, just one win to their name all season, and came away with a 1-2 victory.

Not many betting people would have put odds on Chris Wilder’s team beating a man United team who had not lost at home since last November, but then former Man City player Kean Bryan nodded home after 23 minutes what was Sheffield United’s first goal at Old Trafford since 1993.

Up popped former Blades player Harry Maguire to head home and level the scores on 64 minutes, and most fans would have expected the floodgates to have opened after that, but Sheffield United hung on, until on 74 minutes, substitute Oliver Burke’s deflected shot flew into the net off Alex Tuanzebe, courtesy of the crossbar to make it 1-2.

The result leaves Man United in second spot, but now one point behind neighbours City, who have a game in hand over them.

Thank you for taking the time to read this news article “Sheffield Utd Stun Man United At Old Trafford”.