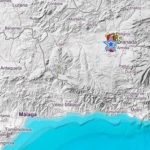 Granada Rocked By Three Earthquakes With Residents Fleeing To The Streets.

GRANADA was rocked by three powerful earthquakes last that caused residents to flee their homes in fear. The three earthquakes, with magnitudes of 4.1, 3.9 and 4.3 on the Richter scale with a depth of 5 kilometres, were felt most at their epicentres in the Granada towns of Sante Fe and Chauchina.

Witnesses reported the ground was shaking and that some road surfaces were seen cracking, loose concrete on some of the older buildings fell into the street, narrowly missing some residents who ignored the curfew to fill streets, hoping for an end to the horrible experience. A resident of Granada, David Orozco, Tweeted the video below at 11.17 pm.

Granada is shaking. 3/4 4.2 – 4.4 Earthquakes in a while. Quite a lot for spanish standards. Level 6 can bring buildings down here. People is going out beside the current curfew. pic.twitter.com/Quco3baOrS

According to data collected by the National Geographic Institute (IGN), the quakes started occurring from 10.36 pm onwards. The tremors and subsequent aftershocks were felt in Malaga city and across various areas of the province. More than twenty aftershocks reverberated through the city until the early hours of the morning reported IGN.

Pedro Sanchez, the Spanish PM, called for calm and asked the residents to follow the instructions of the emergency services. The president of the Junta de Andalucía, Juanma Moreno, also Tweeted said that he had been informed of the quakes and that he was ”very aware’ of the situation in Granada.