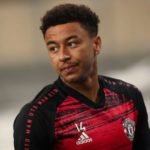 West Ham have reportedly asked Manchester United about the possibility of taking 28-year-old Jesse Lingard on a loan deal until the end of the season, with the United academy graduate’s current contract at Old Trafford running until 2022.

Lingard has played in two Carabao Cup matches this season, and one FA cup match, but has not started a Premier League game for Man United since July 2020, and should the loan go through, it would see him link up again with former United boss David Moyes.

In order to clinch the loan signing, to comply with Premier League rules, the Hammers would first have to make one of their current loan signings permanent, as they already have the two maximum allowed, with Said Benrahma and Craig Dawson on loan deals.

It is thought that Moyes is looking to make Brentford loanee Benrahma’s deal a £20m permanent move, which would then leave the door open to bring in the England international.

Thank you for taking the time to read this news article “West Ham Want Jesse Lingard On Loan From Man United”.