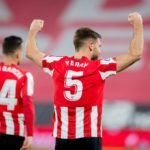 After lifting the Super Cup on January 18 after a thrilling game with Barcelona, Bilbao are now climbing up the La Liga table, moving up to 9th under new boss Marcelino following this latest victory on Monday, January 25.

The game started quickly and it was Getafe that shocked the Super Cup champs with a goal within the first 19 seconds thanks to Marc Cucurella’s headed finish from a Carles Alena cross.

This spurred Athletic Club into action and after mounting pressure, Raúl García volleyed home a cross from the left that was beautifully supplied by Iker Muniain.

Garcia got on the scoresheet again, heading home his second of the game on 60 minutes.

At 3-1, the game was all but done, however, the midfield pair of Alex Berenguer and Oscar De Marcos added further goals in the closing stages.

The 5-1 result was Bilbao’s biggest win of the season and condemned Getafe to a humiliating defeat after such a quick and promising start.