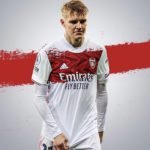 Arsenal have agreed to pay Real Madrid a £1.8m loan fee for Martin Ødegaard plus his wage of £38,000 a week, which would make the total outlay about £2.5m until the end of May.

The young attacker was determined to leave Madrid this month in pursuit of regular football between now and the end of the season and Arsenal have been searching for a creative midfielder since the start of the campaign.

Ødegaard has made just nine appearances for the Spanish champions in all competitions this season and Arsenal have been desperate to fill the void left by Mesut Ozil, who when on-form, was a great player for the Gunners.

Ozil has now made his move away from the Emirates after completing his signing with Fenerbahce and now the 22-year-old Norwegian will be hoping to be the bright spark to ignite Arsenal’s faltering season.

When asked about what the capture of Odegaard could mean for Emile Smith Rowe, the Gunners’ 20-year-old attacking midfielder who has been playing well for Mickel Arteta since coming into the side, the Arsenal boss said: “We have a very clear idea of how we want our players to develop and what they need to do that.

“All the decisions we make are just to reinforce their development and try to give them the best possible chance.”