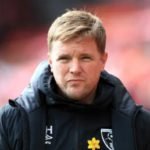 COULD Newcastle Be Ready Join Celtic In The Race To Sign Eddie Howe As Manager if they decide to sack Steve Bruce?

Reports are rife that Newcastle could be considering 43-year-old former Bournemouth manager, Eddie Howe, still recognised as one of the brightest young managers, as a replacement for Steve Bruce should the club fire the under-pressure manager.

According to bookmakers PaddyPower, Celtic remain favourites for Howe’s signature and they have now suspended betting on Howe joining Celtic, but, with Newcastle losing again on Saturday 23 to Aston Villa, the Magpies have not won for ten matches and Bruce has been blasted by fans on social media for his team’s negative brand of football.

Mike Ashley, the Sports Direct supremo, and owner of Newcastle United, is even drafting in Graeme Jones, the former Luton boss as a coach, to try and give his manager all the support he needs in a bid to turn things around at St James’ Park.

With The Magpies languishing in 16th spot in the Premiership, and out of both domestic cup competitions, Mike Ashley knows he might have to act soon, although he will be aware of the added expense involved in cutting Bruce free, and Howe’s attacking style of football would be a breath of fresh air to the loyal St James Park fans.

And of course, only yesterday, fans favourite Rafa Benitez quit his job in the Chinese Super League, so could be interested in a return to the Premier League.

Thank you for taking the time to read this news article “Could Newcastle Be Ready Join Celtic In The Race To Sign Eddie Howe As Manager”.