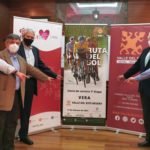 THE 67th edition of the Vuelta Ciclista a Andalucia has been postponed, the organisers announced.

The first stage of the race would have begun in Vera, following a 140.4-kilometre route to the Geoda de Pulpi.

The long-established race was due to run between February 17 and 21 but it would have proved impossible to hold the race owing to the new anti-Covid measures recently introduced by the Junta de Andalucia.

The postponement was announced to the International Cycling Union (UCI), said the organisers, who revealed that they have now applied for the Vuelta to be held between May 24 and 28.