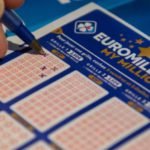 THE Euromillions jackpot of €80.5 million on Friday, January 22, was won in Spain.

There was only one first category winner, who had all five numbers and two stars correct, who will obtain the full prize of €80,566,353, and the ticket was reportedly stamped at number 13  Lottery Administration in Alcorcon, Madrid, the State Lottery and Bets department informed.

The extra million, with the code JXW44709, was also won in Spain on Friday, more specifically in Valdeverdeja, Toledo.

The prize money for Tuesday, January 26, will be back to the €17 million minimum for first category winters.

The money raised on Friday was more than €61.1 million and the price of each ticket in Spain is €2.50. There are 13 categories which receive prize money.

The first Euromillions draw was held in 2004 and people from Spain, Switzerland, France, Ireland, the UK, Portugal, Austria, Belgium and Luxembourg can now take part.