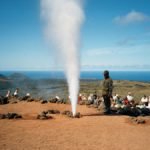 The Canary Islands regional government announced on Thursday evening (January 21), that from midnight on Saturday, January 23, the island of Lanzarote, including neighbouring islet La Graciosa, will raise its coronavirus alert to the new level four.

This move has been brought in to try and slow down the recent rapid rise in the number of cases of the virus on the popular holiday island, with Julio Pérez, a spokesman for the executive, saying, “Lanzarote has a very worrying outlook due to the speed with which infections increase as well as other indicators”.

He added, “For this reason, we must face the health situation, and that is why we have created level four today that we did not have until now, to further toughen the intensity of the restrictions”.

The Government has placed a curfew between 10pm and 6am daily, and social gatherings are reduced to a maximum of two people, with non-essential economic activity having to cease at 6pm, and in addition, the entry and exit of people into Lanzarote will be restricted, except for a ‘justified cause’.

All bars and restaurants must close at 6pm, shops must reduce their number of customers inside to 25 per cent, residents are being urged to work from home where possible, and the capacity on beaches and in pools is also being cut.

Perez pointed to how the neighbouring island of Tenerife had dealt so well with the virus, having just last Monday (January 18) been downgraded to level two, after a huge decrease in virus cases, and stressed that the new regulations for Lanzarote did not amount to confinement, as mobility was still allowed, but he urged citizens to stay at home when possible.

Thank you for taking the time to read this news article “Lanzarote Goes Up To New Alert Level Four On Midnight This Saturday”.