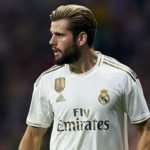 Real Madrid’s Nacho Fernandez is in quarantine after close contact with a positive.THE defender won’t be in tonight’s squad as Los Blancos take on Alcoy in the Copa del Rey.

Despite being in boss Zinedine Zidane line-up, Spanish international Nacho has been forced to self-isolate while he waits for the PCR to confirm whether he is positive or not for coronavirus.

The footballer – who has spent his entire career at the club – tested negative in a first test and this morning travelled to Valdebebas, Madrid, to undergo a second.

Nacho’s brother Alex, who plays for Cadiz, revealed last March that an elder member of the family had died due to coronavirus – though this is unrelated to Nacho’s current quarantine.

Alex, who previously played for Real Madrid told Diario de Cadiz at the time: “In Madrid, there are people in the family that have tested positive and an elder member of the family has died.

‘We can say that we have been affected.”