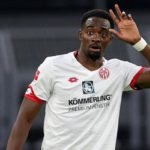 Mainz striker Jean-Philippe Mateta, aged 23, has arrived in London for a medical today (Wednesday), and is poised to sign on loan for Crystal Palace, reports Sportsmail.

The deal is allegedly an 18-month loan deal of £2.7m, with the obligation to buy Mateta for £13.4m when he has started 15 Premier League matches.

His arrival could signal the sale of Christian Benteke, who has struggled for goals this season, with only three to his name, and strike-partner Jonathan Ayew has managed just the one goal, whilst Michy Batshuayi, since re-signing on loan from Chelsea, has not found the net once.

Roy Hodgson has been an admirer of Mateta for some time and will hope his arrival will put an end to that lack of goals, if the on-form striker can continue his rich vein of form that has seen him net 10 goals already this season for Mainz, with seven in the Bundesliga.

Thank you for taking the time to read this news article “Crystal Palace Set To Confirm Signing Of Mainz Striker Jean-Philippe Mateta”.