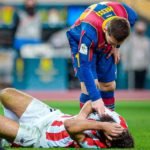 Lionel was sent off for the first time in a Barcelona shirt – after 753 games – and could be facing a 12 game suspension if found guilty of punching Athletic Bilbao forward Asier Villalibre in the last minute of extra time in the Spanish Super Cup – which Barcelona went on to lose 3-2 following a superb performance from Bilbao.

The referee only confirmed his aggressive act after reviewing the VAR.

Ronald Koeman’s side currently sits third in the La Liga table, seven points behind leaders Atletico Madrid and if the Barca captain is suspended, he will miss a significant portion of the domestic season.

Messi has been strongly linked with a move away from the Nou Camp with PSG showing strong interest in the 33-year-old whose contract runs out in the summer.

PSG sports director Leonardo Araujo, speaking after the Spanish Super Cup final said: “Great players like Messi will always remain on the list of future possibilities for PSG. But now is not the time to talk about this or to dream.

“Four months in the world of football is an eternity, especially in the current period. there will be time to talk about it,” Leonardo stressed.