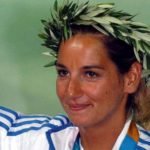 A SENIOR Greek sports official has resigned after a Gold Medal olympian claimed a member of his sailing authority sexually abused her in 1998.

Although Aristides Adamopoulos was not named directly by his Olympian accuser, the leader of the Hellenic Sailing Federation (HSF) has stepped down from his top job citing “great negative publicity”.

The sports official denies claims that he was the sports officials that Gold Medallist Sofia Beakatourous alleges performed a non-consensual “lewd act” after inviting her to his hotel room ahead of the 2000 Sydney Summer Olympics hosted by Australia.

Beakatourous, who was just 21 when the alleged incident occurred, says that her desire to continue competing in her sport of sailing kept her silent about the assault for more than two decades.

However, she has now come forward and publicly reported the incident in the hope that future female athletes have the courage to stand up against abusers in the male-dominated world of sport.

“Sofia bravely broke the chain of fear and silence, showing the way for the stigma of guilt to pass from the victim to the perpetrator,” said Greek Sports Minister Kyriakos Mitsotakis in a statement on Facebook.