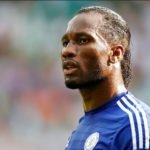 Didier Drogba, arguably Chelsea’s greatest ever player, has revealed his 10-year marriage to Lalla Diakate is over, after photos and a video of him in bed with a mystery woman went viral on social media, with a spokesman for Drogba claiming the uploaded media had been hacked.

The 42-year-old Ivory Coast legend has always maintained a very private life but took to Instagram to tell his followers, “I’m not in the habit of discussing my private life. But, because of speculation in the media today, I can confirm that sadly, after 20 years together, Lalla and I took the difficult decision to separate last year. We remain very close, and our main priorities have been to protect our children and our family’s private life. May God bless you”.

The video shows him in bed with a semi-naked young woman who playfully bites his shoulder, with Drogba then screaming and appearing to say, in French, “She’s positive! She’ll infect me by biting me!”, which has caused huge criticism in his native West Africa.

Drogba won a significant number of trophies during his two spells at Chelsea, including Stamford Bridge, including the Champions League in 2012, and four Premier League titles, scoring 104 goals in 254 top-flight matches for the club, as well as being named “African Footballer Of The Year” on numerous occasions.