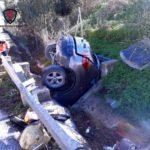 The vehicle was heading towards Campillos when it left the road and crashed into a rain overflow drainage channel where it got stuck.

According to the 112 emergency services in Andalucia, firefighters from the Provincial Fire Department in Coin had to rescue one of the occupants who was trapped inside the car. The other was able to get out of the vehicle.

Both were injured and were treated by paramedics at the scene.