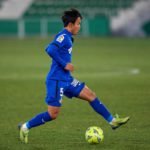 HOME side Elche lose as Getafe pick up a much-needed win in La Liga, their first of 2021, after securing a 3-1 away victory at the Estadio Manuel Martinez Valero.

The hosts went ahead early on thanks to a goal from Raul Guti on four minutes, however, Jose Bordalas’ side, who had only won once in league action since October 17, scored just before the break following a finish from Marc Cucrella.

Elche then found themselves down to ten men after Marcone’s expulsion for a double yellow card on 52 minutes and Getafe were able to take advantage.

Jaime Mata followed up from close range after Takefusa Kubo’s shot was saved to score in the 69th minute, making it 2-1 to the visitors and Angel Rodriguez wrapped up the victory from the penalty spot in the last minutes of the game.

The result sees Getafe move up from 16th to 13th in the La Liga table with Elche remaining inside the relegation zone in 18th.