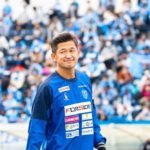 Record-breaking Japanese footballer Kazuyoshi Miura signs a new contract with J1 League side Yokohama FC, at the age of 53.

Kazuyoshi Miura, the oldest scorer in Japanese professional football when he scored in 2017 at 50-years-old, is set to play on after it was confirmed that he will renew for another year with Yokohama FC.

Miura, who will celebrate his 54th birthday in February 26, a day before the 2021 J-League campaign kicks off, will renew his bond with his current club. It will be his 17th season with the club he joined in 2005, his 36th overall.

Nicknamed ‘King Kazu’ in Japan, Miura said in a statement: “Last season, I was feeling the joy of playing football at a time when the world was facing a tough situation because of the new coronavirus.”

The forward has also been part of the national team, being a regular player in the footballing boom experienced by the country in the 1990s and was the poster boy of the newly launched league in 1993. He also was part of the Japan squad that won the 1992 Asian Cup.

Miura started his career with Santos in Brazil in 1986 and has played for Genoa in Italy and Dinamo Zagreb. He also had stints in Croatia and Australia as well as at other Japanese sides.