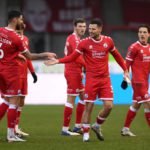 LEAGUE Two’s Crawley Town stun Premier League’s Leeds Utd in the third round of the FA Cup on Sunday, January 10 with a fantastic 3-0 victory.

The huge upset was secured with three second-half goals, two coming in two-and-a-half minutes – a fine solo effort from Nick Tsaroulla, playing only his seventh game in senior football, and Ashley Nadesan’s near-post drive – which were enough to stun the Marcelo Bielsa’s side, who have now been eliminated at this stage for the last four seasons.

John Yems’ side, who stand 62 places from Premier League’s Leeds United in the Engish football tables, scored a third 20 minutes from time when Jordan Tunnicliffe rammed home a rebounded shot.

Yem’s, whose side could have scored more, brought on The Only Way Is Essex star, Mark Wright, for his People’s Pension Stadium debut having signed for the club on non-contract terms in December.

33-year-old Wright, who started his career at Arsenal and Tottenham before going into television, is making a documentary with the club to see if he can make it as a professional player.

Crawley next travel to Bradford in Sky Bet League Two and Leeds host Brighton in the Premier League on Saturday at 3 pm.