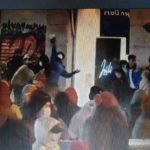 Local police in Madrid have been forced to disperse major crowds in Madrid due to a snowball fight!

A pitched battle of snowballs in Callao close to Madrid ended with the Local police dispersing crowds at around 7 pm on Saturday, January 9.

Snowfall in the capital has not been seen this heavy in fifty years some residents claimed.
The main fight centred around 70 people who were heard singing the macarena and “who cares” from the Spanish rock band Alaska.

The Mayor of Madrid Jose Luis Martinez -Almeida reminds citizens this is an unknown snowfall and a serious situation, not a game.

Local sources confirmed that 70 to 100 people in the main square Plaza De Callao and Gran Via were cautioned and removed from the gathering along with measures to prevent them from returning.