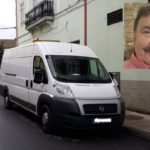 A BODY, thought to belong to Jose Casar, better known as Pepito, who was reported missing on January 3, was found inside a van in El Puerto de Santa Maria, Cadiz.

The National Police report that the body of the man, aged 75, was found at around 8pm on Thursday, January 7, in a van parked in Avenida Menesteo. It was closed from the inside, the the police had to force open the door.

The body showed no obvious signs of violence. The coroner and forensic teams attended the scene.

The missing man had diabetes and heart problems, according to the National Police.

Following appeals on social media, the van, a Fiat Ducato, was found by a local resident who went to look in the area where the man had last mentioned to his relatives that he had parked. When he found the vehicle, he alerted the police.

The victim was from Galicia, and had been travelling around Andalucia in his van for a month.

His family reportedly spoke to him every day, but after December 31, they had been unable to contact him. His phone was turned off or had no coverage, which they had said was unusual, as he always made sure he stopped in areas where he could get a signal.

On December 31, he had told relatives that he had parked his van in El Puerto de Santa Maria, Cadiz.

His relatives, in Alicante, had reported him missing and contacted hospitals in the area.