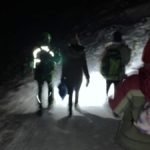 FIVE youths, with symptoms of hypothermia, were rescued by Guardia Civil from an altitude of 1,970 meters in Navacerrada, near Madrid.

They were wearing trainers and jeans, with no proper clothing appropriate for the area in which they were found, the Garganta del Infierno.

They were spotted by a National Police officer hiking in the area who alerted the Guardia Civil.

The youths were three Colombian girls and a man of the same nationality, as well as another Indian man. One of them had a sprain.

The youths were lost and disoriented for about three hours, had no charge on their mobile phones and only had a lighter to guide them in the dark.

Temperatures had dropped to -8ºC and Guardia Civil believe they would have died had they not been found by the police officer.

Fivi, a female German shepherd specialising in this type of operations took part in the rescue of the youths from the freezing Navacerrada mountain.