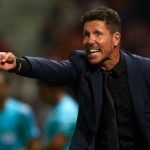 Diego Simeone will have Premier League managers sweating under their collars at the news he has hinted at leaving Atletico Madrid after their horror show he endured on Wednesday evening as his team went out of the Spanish Copa Del Rey to a third-tier club, Cornella, losing 1-0.

Atletico had the same experience last season, going out in the cup competition to a club from the third-tier, and last night Simeone hinted he might not be around next season to see if it happens again, when he said, “Cornella played better. In the whole game, what they wanted was always done better than what we wanted. They took advantage of the set-piece situations and immediately found the goal”.

He added, “The boys tried to compete in the best way. In the first half, we had more chances, and in the second, it was rockier. It got difficult after the red card. This competition has not given us satisfaction in recent years but solutions will have to be found if we are here next year”.

The news will not bode well with the likes of Frank Lampard at Chelsea, and Mikel Arteta at Arsenal, both of whom are enduring an awful time this season in the Premiership, with their teams not performing too well, and their jobs surely on the line.

Thank you for taking the time to read this news article “Premier League Clubs On Alert As Diego Simeone Drops Hint About Leaving Atletico”.