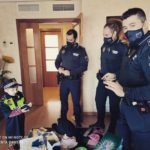 The festival of The Three kings was made even more special for one little boy who dreams of becoming a police officer when he grows up. Four-year-old Lucas, who is in hospital battling cancer, received a surprise visit on January 6 from three police officers and was even given his own police suit so that he could practice being a man of the law.

“Because magic is found where one least expects it, today the Magi of the Alicante Local Police had a surprise in store for Lucas. At 4 years old, he is a great little champion who is very clear that he wants to be a policeman. He conquered us all this Christmas when we met him at the visit organized by the Children’s Oncology Unit to the House of Santa Claus. A lot of strength for Lucas and his family! ”