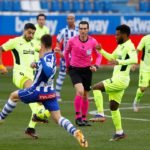 LUIS Suarez scores a late winner to secure a 2-1 win over Alaves and fire Atletico Madrid back to the top of the La Liga table.

Uruguayan Luis Suárez popped up in the 90th minute to spare the blushes of Felipe Augusto who scored a late own goal against 10 man Deportivo Alavés.

Marcos Llorente put the visitors ahead after 41 minutes with his latest long-range effort and they looked good for the win when Victor Laguardia’s 63rd-minute red card seemed to put an end to any comeback from the home side.

However, an outrageous own goal from Felipe on 84 minutes meant an unlikely draw was on the cards until superstar striker Suarez scored a record-breaking goal – setting the record for the best start at the club in the 21st century.

Atletico Madrid restored their two-point advantage at the top of the league – over Real Madrid who beat Celta Vigo on Saturday (January 2) – after a fourth consecutive league win.

The defeat leaves Alves in 13th place with 18 points.

The win for Atletico comes after it was announced earlier today that Kieran Trippier had his 10-week ban for breaching betting rules suspended by Fifa, pending an appeal.