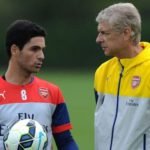 Arsene Wenger, the Arsenal manager for 22 seasons – winning three Premier League titles, and seven FA Cups – has offered his services to the club, and more importantly, to current manager, Mikel Arteta, if he needs him, with Arsenal currently in 14th position in the Premier League table, and Arteta under pressure to keep his job.

Wenger, aged 71, now works as the Chief of Global Football Development for FIFA, having left Arsenal in 2018,  but says he will happily return to The Emirates should they call him, with his love for the club well-known in football circles, with the club being far from successful since his departure, when he was replaced by Unai Emery, who then was replaced by Pep Guardiola’s former Man City assistant, Arteta, who, Wenger signed for Arsenal during his reign as manager, and who manged to win the FA Cup in his first season in charge.

Duringa podcast with ‘Men In Blazers’, Wenger said about Arteta, “If I’m needed, I will help them. But I don’t expect that, no. I wish nothing. Time is a good doctor, you know?”, adding, “He’s lucky that straight away he got into a big club. You normally have to work ten years to get in that position. But because he played for the club and was a good player, he got his chance. I wish him well”.

Thank you for taking the time to read this news article “Arsene Wenger Offers To Go Back To Arsenal To Help Mikel Arteta.