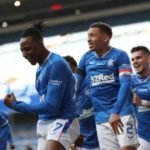 Glasgow Rangers ran out 1-0 winners at Ibrox against Celtic in this afternoon’s Glasgow derby, their third Old Firm in a row, to go 19 points clear at the top of the Scottish Premiership, thanks to a 70th-minute own goal by Callum McGregor, from a Rangers corner.

Neil Lennon’s gameplan seemed to be working perfectly, with his Celtic team dominating play for long spells, but it all fell apart on 62 minutes, when the Israeli defender, Nir Bitton, took down Alfredo Morales as he turned him, and referee Bobby Madden went straight in his pocket for the red card, and Rangers capitalised just eight minutes later.

Joe Aribo met the corner from James Tavernier, and his glancing header deflected off the unfortunate McGregor and into Vasilios Barkas’ goal, not long after Lennon had brought on Shane Duffy, who had been mysteriously left out of the starting eleven, to try to turn the game, who was also lucky to escape a red card after a reckless challenge on a Rangers player.

Thank you for taking the time to read this news article “Rangers Beat Celtic In The Glasgow Derby To Go 19 Points Clear”.