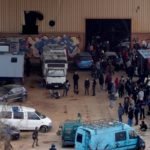 A New Years Eve party was finally stopped by police after nearly 2 days.

The party close to Barcelona had been going on for nearly 48 hours when police finally stopped it with arrests and confiscations of equipment and alcohol.

300 people attended the party in a disused warehouse just outside Barcelona in a village called Llinas del Valles situated 20 miles from central Barcelona.

Local police confirmed 3 people had been arrested and were believed to be the organisers.

Thirty (30) vehicles from local law enforcement were involved in the vast operation to stop the event which began on new years eve and lasted around 40 hours in total.

Police also confirmed all partygoers would face fines with harsher penalties for the organisers guaranteed.

Police officials were criticised by some for the length of time it took to bring the party to a close. However, the head of the operation confirmed this was a monumental task. To ensure safety for both the officers involved and the public it needed to carefully planned and carried out with the minimum disruption to the area and people living locally.

Fines for breach of COVID rules and restrictions on numbers at any gathering can range from 300 euros on the spot fines to 50.000 euros for collective offences.

The full investigation into the “rave” and the operation to stop it are ongoing.