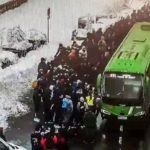 150 Passengers Treated for Hypothermia While Waiting at Madrid Bus Station in Below Zero Temperatures.

As reported earlier this by EWN, the forecast for Madrid was the largest snowfall in a hundred years and it started today. Fourteen autonomous communities remain on alert for snowfall, wind, minimum temperatures and coastal phenomena. The storm has caused snow and ice to complicate traffic on the road accesses to the Sierra de Madrid on Saturday, Dec. 2.

A total of 150 people waiting for the bus in Cotos received care, as well as the occupants of 15 vehicles that were trapped in La Pedriza, after the roads were closed by the Forestry Agents of the Community of Madrid, after testing conditions and announcing that the snow and ice could endanger the safety of travellers.

The 112 coordinated Civil Protection and the Red Cross to meet the needs of users for symptoms of hypothermia after reaching minus ten degrees below zero and the Civil Guard has controlled the queue to ensure interpersonal distance.

Finally, the Ministry of Transport has sent a snowplough that has managed to clean the road, a manoeuvre that has been complex due to the dimensions of the vehicle and the road.