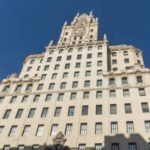 The Spanish National Police evacuated the immediate area around the Telefonica building on Gran Via in Madrid, on December 26, after receiving a call at around 2pm, saying a bomb had been planted inside the iconic building, according to a report in the Madrid Metropolitan.

It later turned out to be a hoax call, and police are trying to trace the source of the caller, but so far, no arrests have been made.

Gran Via, and the adjacent Fuencarral Street, are the two busiest main shopping streets in Madrid, full of brand-name stores, and the officers successfully and very discreetly, managed to evacuate the entire area without telling the public about the bomb threat, and after the incident was found to be a hoax, they allowed the shops to open up again, and shoppers went about their shopping, blissfully unaware of what had just taken place.

The Telefonica building on Gran Via, is the headquarters of Spanish telecommunications company Telefonica and incorporates a museum and an auditorium, and when it was constructed in 1929, it was, at the time, the tallest structure in Europe.

Thank you for taking the time to read this news article “Telefonica Building in Madrid Evacuated In Bomb Scare”.