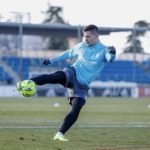 WHILE Raul Jimenez continues his recovery from a skull fracture, Wolves could be set to make a move for Real Madrid striker Luka Jovic.

Wolves have reportedly made a loan enquiry for Real Madrid striker Luka Jovic, according to The Athletic, with manager, Nuno Espirito Santo, also said to be interested in Liverpool’s Divock Origi.

Zinedine Zidane last gave the Serbian forward a start in La Liga in September and looks like he is not part of any future plans for the Spanish giants.

However, Wolves may face competition for the striker, as many clubs, including rivals Atletico who just terminated the contract of Diego Costa, are looking to boost their attacking options in the upcoming transfer window.

Wolves, who have managed just four goals in their last five Premier League outings, will be hoping that they can get the signing over the line.