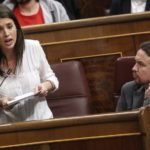 SPAIN’S Vice President of Government Pablo Iglesias and his wife Minister Irene Montero have secured a restraining order against a man who frequently staged protests outside their home.

The country’s most prominent political couple said that the actions of Miguel F had made them feel “afraid” as he stalked their movements and staged regular protests outside their home in suburban Madrid. Pablo Iglesias leads the left-wing Podemos coalition party, while Irene Montero is a senior government minister.

The defendant has been slapped with a 500 metre restraining order against Iglesias and Montero, reduced from the 3 kilometre measure originally pursued by the court.

Miguel F argued that he was merely exercising his right to protest when he would appear regularly outside the couple’s house in the Madrid town of Galapagar. Iglesias, who is Spain’s second most powerful politician after PM Pedro Sanchez, said that his frequent protests were frightening to the couple’s three young children.

The accused admitted that he had once climbed a rock to film the interior of the Podemos politicans’ home, despite being aware that Iglesias and Montero lived with their children. He claims he was expressing his dissatisfaction with the PSOE/Podemos government, in particular its response to the coronavirus pandemic.