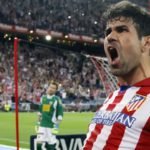 DIEGO Costa is set to leave Atletico Madrid after asking for the ‘almost’ immediate release from his contract.

Costa’s deal expires in the summer but he has been given permission to miss training and could be allowed to leave for free after asking the club to terminate his contract in January.

The former Chelsea striker, who returned to Atletico in 2018, will have many clubs clambering for his signature, with Inter Milan topping the list as they look for a suitable deputy for Lukaku.

The club will sit down to negotiate with the player and assess the situation.

The Spanish-Brazilian attacker did not participate in this Monday’s training session at the Majadahonda Sports City with another noticeable absence, Kieran Trippier, who is currently serving a ten-week ban from football after breaching anti-betting rules.