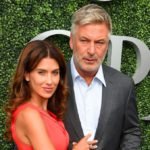 ALEC Baldwin’s wife Hilaria Baldwin defends her fluctuating Spanish accent after receiving heavy criticism online for not telling the truth about her heritage.

The 36-year-old wife of Alec Baldwin, states that she was born on the island of Mallorca, Spain, and raised in Boston, however, the internet broke out into conspiracy theory after a tweet which read: “You have to admire Hilaria Baldwin’s commitment to her decade long grift where she impersonates a Spanish person.”

Further internet searches revealed that Baldwin’s real name is actually Hillary Hayword-Thomas, and she grew up in Massachusetts and the Twitter detectives led to some of her old classmates coming forward.

One former classmate tweeted: “I went to high school with her. Genuinely lovely person, I recall, but fully a white girl from Cambridge.”

Another said: “I went to high school with her. She was perfectly nice and serious about ballroom dancing. Her name was indeed Hillary Hayward-Thomas and she did not have her current accent.”

A 2016 interview with Hola! magazine also stated: “Hilaria, who was born in Spain, has made certain to raise her children with her native language, Spanish,” which provides further confusion for fans as the mother of five recently broke out an American accent on Instagram, apparently highlighting inconsistencies in her family’s origins.

After the points were raised by social media user, Alec Baldwin’s wife shared to her Instagram: “There’s some stuff that needs to be clarified,” and, “There have been some questions about where I’m born, I’m born in Boston … I spent some of my childhood in Boston, some of my childhood in Spain, my family, my brother, my parents, my nephew, everybody is over there in Spain now, I’m here.”

Responding to questions about her accent, she said in the video: “I am that person, if I’ve been speaking a lot of Spanish, I tend to mix them or if I’m speaking a lot of English I mix that, it’s one of those things I’ve always been a bit insecure about.”