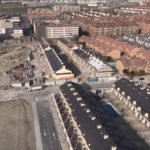 GUARDIA CIVIL officers have arrested members of a teenage street gang that terrorised their community in suburban Madrid.

The gang, known as SR14, was comprised of eleven 14-year old boys in the Madrid suburb of Rivas Vaciamadrid, roughly 15 km from the capital’s city centre. All of the members have been arrested after waging a campaign of terror against the area’s youths, who they routinely assaulted and robbed.

The gang, who identified themselves with distinctive clothing and symbols, brutally attacked local teens and broadcast the assaults on social media. In one incident, a large knife was held to the throat of one minor while in another a group of youths was held captive while the gang awaited reinforcements.

The suburb’s young teens were so terrified of the gang that most did not report their attacks to their parents or police for fear of violent reprisals. All of the arrested youths are 14 years old of Spanish nationality and residents of Rivas.

Like most major European capitals, Madrid is home to many violent street gangs. In a recent case, police seized a grisly 59cm machete from one young man that he was brandishing against rivals in an open-air street brawl.