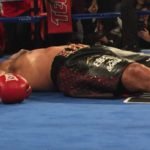 Kabary Salem, 52, was indicted on Friday, December 18 in New York after being captured in the Middle East following over a year on the run. The former Olympic champ was charged with strangling his 25-year-old daughter, Ola Salem, in October last year and dumping her body in Bloomingdale Park on Staten Island.

Salem, nicknamed ‘The Egyptian Magician’, competed in the 1992 and 1996 Summer Olympics and is infamous for killing opponent Randie Carver during a fight in 1999.

“Throughout the course of this tragic case, we had never lost hope that the alleged killer would be arrested and charged,” said District Attorney Michael McMahon. “We will continue to work tirelessly to hold this defendant accountable for the brutal act of violence he has been accused of committing against his own daughter.”