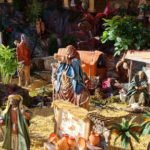 MOJACAR’S Nativity Scene in the Plaza del Parterre is open each day until the Christmas holidays end on January 6.

Although so many events have had to be cancelled owing to the pandemic, this has not affected one of the town halll’s longest-established traditions, said Culture councillor Raquel Belmonte de Haro.

The figures were donated by Manuel Navio, owner of Resturante La Capilla where for many years they were on display with other works of art.

He acquired them in Puente Tocino (Murcia) where they were made by one of the region’s prestigious artists specialising in making Nativity Scene figures.

With Mojacar as a background, the tableau’s scenery – created by pupils studying art at the Rey Alabez high school – reproduces many of the town’s best-known buildings and streets in the Old Quarter, including the Torreon tower, the Fuente and the parish church.