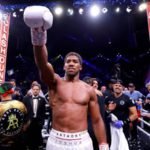 Anthony Joshua, interviewed by The Guardian about the possibility of a unification fight with Tyson Fury, which has been speculated to take place in May 2021, has said, “I want to take his head off his shoulders when that fight happens.”.

Joshua holds the WBO, IBO, IBF, and WBA World Championship belts, and Fury holds the WBC and Ring Magazine belts, but the stumbling block to a unifying fight is the WBO rules which state that Joshua must face the boxer next in line, Oleksandr Usyk, who is a part of promoter Eddie Hearn’s Matchroom stable, who is also Joshua’s promotor, with Hearn hinting that it could be possible to ask Usyk to ‘step-aside’, to allow the big fight to happen between Joshua and Fury.

If the fight takes place, Fury is already the favourite with bookies to land all the belts, but, Joshua sees it differently, telling iFL TV, “I can see everything he’s doing. I analyse it and react well. I don’t want to say too much, but basically when I’m in front of him, for other people the boxer in front of them is moving at a million miles an hour, but for me, I know how to slow down the fighter and see everything that’s coming. The best strategy to have is finding a way to win, rather than a way I’m going to box, I’m just there to win”.

Thank you for taking the time to read this news article “Anthony Joshua Says He Expects To Knock Tyson Fury Out”.