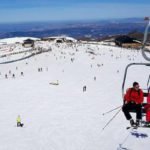 Sierra Nevada in Spain’s Granada Was Host To More Than 11,600 Skiers In the First Weekend Of The Winter Season.

THE SIERRA NEVADA ski resort in Granada Andalucía received more than 11,600 skiers during the first weekend of a winter season that started on Friday. Capacity was limited due to the restrictions with special measures in place to ensure the health safety of all visitors.

Cetursa, the company that manages the resort, said that within the first three days of the Andalucian resort season starting they had accumulated more than 11,600 skiers. Users enjoyed more than 30 skiable kilometres spread over four areas of the Sierra Nevada. The start of the season attracted 2,300 people, this Saturday, Dec. 19, when another 4,100 skied, and Sunday was the day with the largest number of people in the Sierra Nevada with 5,200 skiers.

Sierra Nevada has thanked the workers for their behaviour and especially the respect for the users’ covid protocol measures. The station will carry on next week with the same conditions in terms of slopes, lifts and capacity.