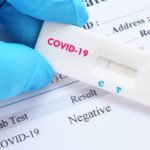 THE National Police have arrested a woman in Madrid for selling false PCR certificates after being caught sending the document to a buyer’s email in less than 24 hours.

On Monday, December 14, officers of the National Police arrested a woman as the alleged perpetrator of a crime against public health and another crime of falsifying documents after being caught selling fake PCR certificates, which she offered on internet sale pages for €40.

She was caught following a successful investigation, which began at the end of October, after the head of a laboratory in Madrid made officers aware that false PCR negative certificates were circulating in the name of her company, which were apparently being issued without her authorisation and without any test or analysis being carried out.

The reports were being offered through well-known trading sites, adding in the advertisement that they were valid for travel to any country and, furthermore, boasting that several people had already used the false certificates without any problem.

The laboratory’s own representative stated that the reports offered were completely fraudulent and very similar to the originals in their format.

As a result of a quick investigation by the National Police, the woman was identified and subsequently arrested and handed over to the judicial authority, while an investigation continues to find those that bought the fraudulent certificates.