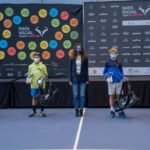 The tour, set to be called the Rafa Nadal Tour by Santander following support of Banco Santander as the new main sponsor, will begin in January 2021 and is set to include new  categories of competition such as under 16’s, under 14’s and under 12’s.

Considered a benchmark in the youth competition calendar, the circuit helps to promote positive values, such as sportsmanship, commitment, camaraderie and effort and benefits the charity which works in Spain and India with the aim of promoting personal and social development of children and young people.

Throughout 2021, the Rafa Nadal Tour by Santander will hold six tournaments and a master’s torunament in different Spanish cities:

After stopping in Barcelona, ​​Seville, Valldoreix (Barcelona), Valencia, Alicante and Madrid, the master’s tournament will be held in Mallorca in September.

Thank you for taking the time to read this news article “Dates for the ‘Rafa Nadal Tour’ 2021 tour have been announced”. For more UK daily news, Spanish daily news and Global news stories, visit the Euro Weekly News home page.