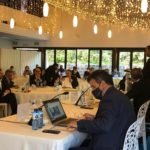 THE AVE high speed train will be linking Elche and Madrid early next year.

Elche’s mayor Carlos Gonzalez told the local Spanish media that the central government’s Minister of Transport, Mobility and Urban Agenda, Jose Luis Abalos, had confirmed that the AVE will arrive in late January.

Abalos, who was attending the Alicante Forum organised by the newspaper Informacion, added the proviso that, as always in these cases, this date depended on the final verification process and authorisation from Spain’s Railway Safety Agency.

During Gonzalez’s meeting with Abalos, the latter added that the drivers who would cover the route will be undergoing two weeks’ training on the new line this month.

The first AVE tickets would be on sale in Elche and Orihuela in January, the minister revealed.

“This is magnificent news,” the Gonzales said. “Talking about an AVE connection between Elche and Madrid means that we are talking about being more competitive and cutting the distance between the two cities.”

Meanwhile, the minister expressed satisfaction that the Spanish parliament had now approved the national Budget for 2021.

“This means the beginning of a  real transformation  of the country’s economic and social reality,” Abalos said.